A downloadable game for Windows and macOS

ALL CHARACTERS DEPICTED ARE 18+ YEARS OF AGE.

Nightmare Temptation Academy is a dating-simulation/choose your own adventure/roleplaying game and rap musical. The game is set in high school in an alternate universe at the end of the world. Visual tropes from anime, videogames and early 2000’s digital culture are referenced and remixed to evoke nostalgia and further allegorize the uniquely Millennial adolescent experience of apathy, desensitization, and confusion caused by first-generation internet addiction and media oversaturation. A binary dialogue decision-making gameplay expresses the protagonist’s struggles with intrusive thoughts and managing impulsivity.  This character-driven gameplay also explores group dynamics, relationships, morality, sexuality, consent, and manipulation. The soundtrack is original, written and performed by the developer Lena NW.

The last five half-human half-animals alive (the dominant sentient species) all go to high school together. This nameless high school is ruled by a machine; the purpose of the machine is unknown, as its creators and relevance of the machine to a larger civilization have been obliterated long ago. In fact, this high school rests on the verge of total annihilation surrounded by the endless abyss of oblivion. The machine glitches as it deteriorates. Despite the complete futility of living on; the students are forced to continue attending high school because they are brainwashed and sedated by the machine. The students are unable to fully grasp their circumstances, having no context for where they are in time or space, so they continue to enact the trifling social interactions typical of high schoolers.

You (the player/protagonist) are a depressed, anxious, suicidal, alienated 14-year-old girl. You were spawned from a post-mordial goop; the spirits, the debris, the carcasses, the residue of all that once was. The ghostly spirits that reared you, raped you in the process of creating you. You live your life carrying the weight of the trauma that is your entire existence; intrusive thoughts and impulses are ghosts that possess you.  Your behavior and the relationships you form with characters as the collective crisis point culminates is up to you (unless of course... you sell your soul).

Easily the best game on the bundle by far. An absolutely unforgettable experience, and I admire how unafraid it is to challenge the new social norms, and how it manages to handle crucial topics in both a humorous and serious way. That can be a hard thing to balance, but it was done wonderfully. Best indie game I've played in god knows how long. I really hope to see more!

Hi, I'm really sorry about it but I don't know where to post my message. Feel free to ask me to delete it if it's not the right place.

I was willing to try Viral from the latest Queer bundle but I can't manage to download the files from the Download button. I have a 404 error.

Would you be able to help me out?

It seems I have a similar error with that page as well (just a heads up):

Same here its like the other games got removed or something, not on their profile page either

Google Drive is preventing the download of the Windows game archive, due to some rate limitation.

Could you please consider uploading it to itch.io CDN instead?

yes i've been having trouble uploading it to itch, but i will try again this week

>ALL CHARACTERS DEPICTED ARE 18+ YEARS OF AGE.

>You (the player/protagonist) are a depressed, anxious, suicidal, alienated 14-year-old girl.

So... actual pedo shit being disguised as not. That's not it fam.

it's literally an allegory for my experiences as minor and what I and other ppl went through. dont see why i shouldn't be able to make work based on my own experiences.

not pedo shit, which is why the characters are drawn like half animal creatures with fully developed bodies lol. seriously.

Yes, I have. They didn't include explicit nudity and sexual content of minors.

You can make content based on your own experiences without including explicit sex scenes of underage characters.

The logic of "but their bodies are fully developed" is the same creepy ass logic neckbeards use to justify creeping on actual underage girls. Same with the "but she's an adult in animal years", goes perfectly with "but she's a 1000 year old vampire not a little girl".

Clearly Itch is fine with it, so you can do what you want, but trying to defend it with the same excuses actual predators use is pretty disgusting

>me: sexualized and abused as a minor

>you: policing how i deal with it

remember. fictional characters. that don't exist. and aren't even human.

holy shit you got triggered by having your pedophilia called out

what is wrong with a 1000 year old vampire that looks like a little girl in a fictional story?

The same thing that is wrong with writing sex fics about Millie Bobbie Brown in a fictional story - it's someone fantasizing about fucking a child.

the point your missing is that there isnt actually any "explicit nudity and sexual content of minors" in this game. because all the characters ARE CARTOONS who are NOT EVEN HUMAN who DON'T EXIST. there aren't even any characters drawn in a way meant to resemble minors

you do not get to police or tell me how i get to make art based on my own experiences.

Finally played it, and it was oh so great.

Mind, I'm not from USA so most of the references and cliches are lost for me because (usa bitchy voice) it' sooooooo americaunnn.

I mean, moody assholes doing mass shootings only happen there, so I was more than happy to get Dorian electrocuted as much as I can, as many times as I can.

great music, great style, sold my soul, OF COURSE, but missed opportunity to get a gay sex scene between Dorian and Chad.

¡Looking forward for you next project! ¡Gracias!

Hi I just purchased the game but, it seems that my computer cannot download the full 7 gigabytes! I have a windows PC and downloaded 7-zip. What do I do?

Okay So I was able to FINALLY get the game extracted but, My PC Crashes on the first "loading pretend its the 90s screen" what should I do?

what are the specs of your computer?

I'm seriously addicted to the songs from the singer's in the game and the album Nightmare Trmotation Academy, the album of the singer Fellatia G and you're/"she is" so damn! freaking good, in particular "Dorian" and "I Kinda Wanna Die".

Can't get Dorian out of my head. What a banger!

Can not open file 'WIN_NightmareTemptationAcademy.zip' as archive

other person who had this problem said this was the solution lmk if it works. it works on my end so im not sure how to troubleshoot:

"My CLI version of 7z was the latest but my GUI one was still the 16.4. Updated and everything is now fine.

Install the latest (stable) version of 7zip and it should work fine:

Archive was otherwise succesfully extracted and the game starts up.

Thanks! Might wanna sticky this solution, if that's possible.

I'm seriously addicted to the songs from the singer's in the game and the album Nightmare Trmotation Academy, the album of the singer Fellatia G and you're/"she is" so damn! freaking good, in particular "Dorian" and "I Kinda Wanna Die".

These are also my two favorite songs on the album! Thank you!

hello!! about how big is the file size for Mac?? I've been trying to download it for over an hour and its still downloading?? its at 7.3 GB rn-

the file size is around 7 GB so it should finish downloading  soon!!!! how fast it downloads usually has to do with ur internet speed/connection

Hey, I love your games but I cannot play this one.

Even when on the desktop and with 7zip it's failing to open the archive.

Hmm, I'm not sure what the solution is as I haven't seen this issue before. Have you tried it on multiple computers? Sorry T_T I want help you be able to play!

Yeah so I've tried to download the archive multiple time and on multiple computers but it's not extracting.

I've ran it against WinZip repair tool and DiskInternals Zip Repair as well but each time files were missing.

I don't think it's an issue with my computer but rather with the ZIP itself. If you can could you please try to upload a new one (pretty please)?

What does the error message on 7Zip say? I downloaded and extracted it the other day and it worked okay. :)

My 7Zip did give me a warning that looked like and error, but I let it finish extracting and it worked without any problems.

Update: I'm a dumb bitch. My CLI version of 7z was the latest but my GUI one was still the 16.4. Updated and everything is now fine.

Sorry about all this.

Thank goodness!!! Ur not a dumb binch clearly because  ur playing this game which is 4 intellectuals ^_^ glad u were able to figure out coz i didnt know what to do >.<

Thanks girll! Let's so be BFFs like totally right now!

the .zip is a genie in a bottle, you gotta rub it the right way

Hey whats this gui update about ? I also have the zip problem...

working with win rar "I will pretend i'am on the 90' and use win rar then" :P

Install the latest (stable) version of 7zip and it should work fine:

Sat down and played this in one sitting, then I went to sleep and the songs played in my dreams over and over, totally engrossing. It's hard to put this experience into words, but it's horrifying, beautiful, disturbing and compelling all at once.

Would love to play this game, but when I download it, it says the file is invalid and I'm unable to unzip it. Any ideas on that, or another way to download it? I'm on windows.

Hey! Try this! Lmk if it works:

If the ZIP file will not open, move it to the desktop.

Then use 7-zip to open it. Select “extract” through 7-zip.

oh, that totally worked! thanks so much, can't wait to play!

This may just be one of the most fucked up games I've ever played but I love it. It's definitely unique, especially for a dating simulator.

thank you for making something so fucking twisted

this game is amazing. the feelings are unique and its worth the time. i dont think ive played something this good

im still thinking about it and i cant wait to experience it again. 5/5 :D (also i would love an ending guide to see if i missed anything! i love these characters and it would be really cool to see them in something else.)

A beautiful fever dream of a shitpost, It made my mouth smile, it made my head hurt, I loved every second of it! Riley is best girl.

Hello, nice game, nice graphics. such strang game, but in a good way :).  I'm a programmer looking for a graphic designer or a team to join and maybe work on new games, are you interested?
email:m.shahiri.m@gmail.com
my LudumDare Game:
https://ldjam.com/events/ludum-dare/46/social-distancing-for-ladybugs

i would help you, but don't know how 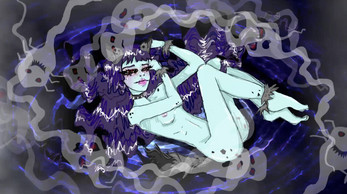 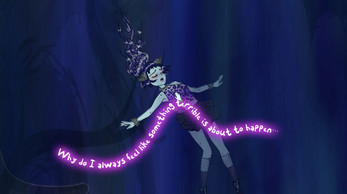 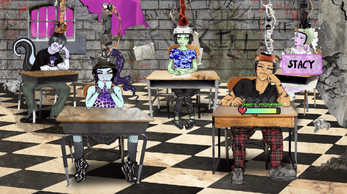 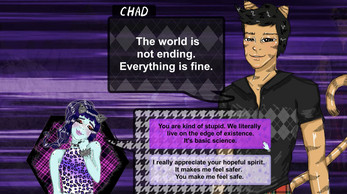 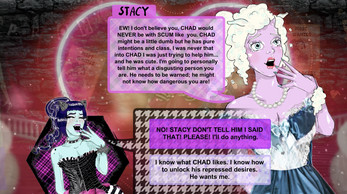 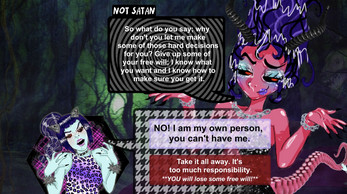 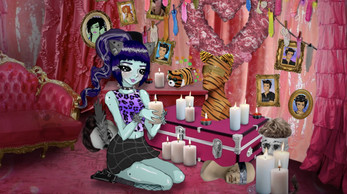 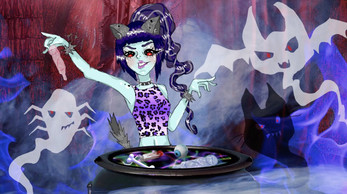 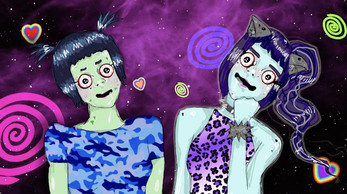 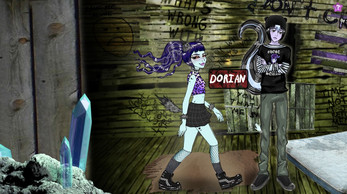 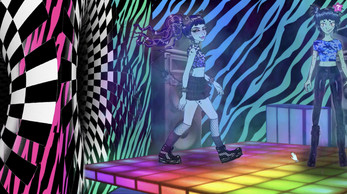 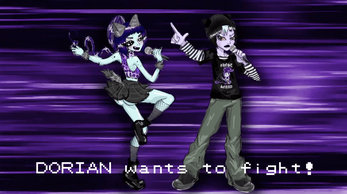 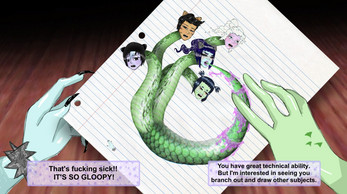 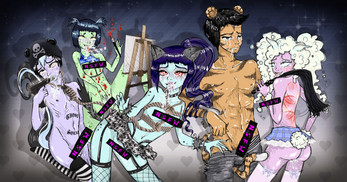